A month or so ago I was hanging out in the garage with my daughters goofing off. I have this collection of coffee cans I can’t bring myself to get rid of, and for some reason I decided to draw a jack-o-lantern face on one. It turned out pretty well, so that evening I cut out the face with a dremel. 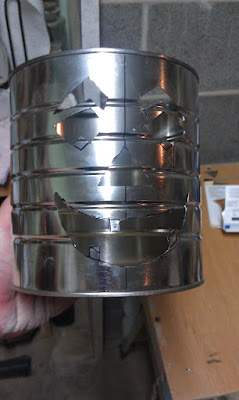 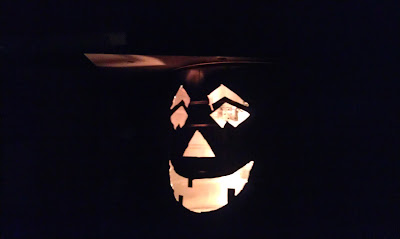 No, the zippo's not upside down, the picture is.

After that I forgot about it for a while and it seemed like its only reason for existing would be to make me happy I had dug out my zippo a few days earlier.  But then I stumbled across a post about pumpkins and LEDs.  Perfect!  I took advantage of my wife’s spray paint habit (that is, she likes to spray paint stuff, not huff it) and dug up a can conveniently named “Pumpkin Orange”.  Hrmm.  I suppose it might be made to work.

I had a couple of missteps (my original attempt at highlighting the cuts did not go well), but I got the can fairly well done up. 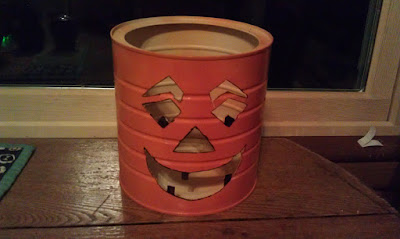 Ugh. Starting to be able to see that mistake I made in his left eyebrow...

After a quick “throw in” test and experimenting with different colors, I decided to use a green LED for highlighting the shape and a flickering LED for ambience.  I cut a lid out of some old paneling then rigged up the LEDs to it with some screws and binder clips. 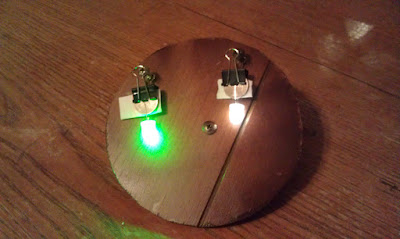 Throw the lid on and see how it looks. 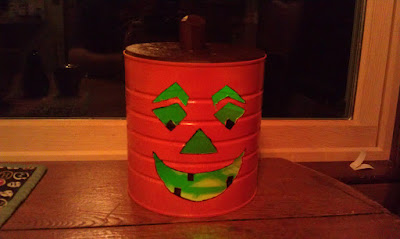 The dowel evokes a stem, yes? 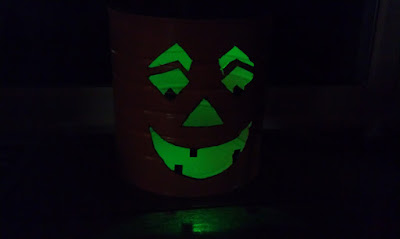 Oof. That left eyebrow is looking worse and worse.

And finally a video.  This whole project really hinges on the flickering “candle” LED, it plus the green LED together make it look really good in person

All in all this was a really satisfying, relatively quick project.  My daughters loved it.  I think I’m going to give them each an appropriately sized piece of paper and let them each draw something I’ll cut out and they can customize (paint, choose lid, LED color, etc).  It also seems to have passed my wife’s crafting muster which is nice.

One unexpected thing – this has been sitting on my kitchen table for the last 24 hours or so, and it keeps catching my eye, even in daylight.  I think I’ve been so conditioned to not leaving candles or other exposed flame going that the flickering is catching my subconscious.